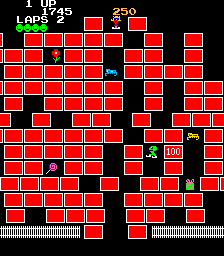 Zzyzzyxx is a stand up coin operated arcade game developed by Advanced Microcomputer Systems, and manufactured by Cinematronics in 1982. It was retitled as Brix for release as a conversion kit in 1983. The title screen and marquee were the only changes. Game concept The object of the game is to guide the hero, named Zzyzzyxx, through a moving maze of bricks to collect gifts and bring them to the fair-haired Lola, the object of his affection. Zzzyzzyxx is opposed by the evil Rattifers, named Boris, Bluto and Smoot, who will try to intercept him as he makes his way through the maze. Zzyzzyxx can collect a helmet in the maze, which can be used to imprison a Rattifer inside a brick, or to break a brick in the row above to move through the maze. As the levels progress, Zzyzzyxx must avoid crumbling bricks, rising missiles, and dropping bombs. The game has a 1up player score and laps tallied at the top of the screen.

As well as the gifts in the gaps, there are also nasties called Rattifers and if you touch one then you lose one of three lives. To protect yourself you can place a brick, either to block a gap so a Raffiter can't move towards you, or you can stand inside one you have placed. A golden helmet can also be found and this allows you to break one brick. As you get further into the game you will also encounter bombs dropping and missiles rising as well as cracked bricks that disintegrate.